Sightseeing on Rügen: And the lamellar package coupling drives in the electric locomotive 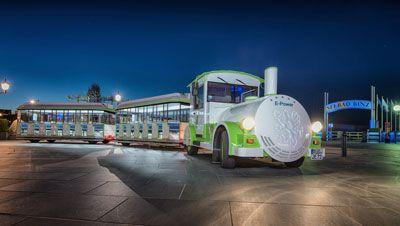 Emission-free, economical and as powerful as a conventional drive - the sightseeing trains on Rügen, with its newly developed electric locomotive system, offer a product for the transport of tourists, which is the nerve of the times. To connect the drive train to the electric motor, the company relies on the robust and powerful "Roba-DS "-Lamellenpaketkupplung by Mayr Antriebstechnik, This keeps the high loads permanently.

Oslo, Madrid, Copenhagen, London or Paris - in an effort to improve urban life quality and environmental protection, more and more European cities are removing cars from their inner city area. The various concepts range from the exclusion of conventional diesel vehicles through a complete driving ban for passenger cars to the creation of an infrastructure that is to make motorized individual traffic superfluous. Like the German Post, which is switching its vehicle fleet to environmentally friendly electric cars in the medium term, more and more companies are currently looking for alternative solutions.

And so does the Sightseeing Trains Rügen GmbH With its powerful electrolok for weaving a pollution free product for the transport of tourists. "Our electric locomotive is not only used when, for example, indoor areas are to be free of emissions, but also in natural parks which are otherwise closed to traffic," explains Stefan Krüger, Head of Production and Development at Sightseeing Trains Ruegen in Binz. The E-Lok, for example, opens up new possibilities where driving prohibitions would exclude persons - for example, families with small children or people who have problems with running. "With our electric locomotive, a larger group of people can participate in offers of nature parks in mountainous regions," adds Stefan Krüger. It is extremely powerful in terms of torque: the power and the range correspond to a conventional drive. "It also creates difficult routes with up to 24 percent gradient without problems."

In order to connect the powertrain to the electric motor in the locomotive, the Binzer weaving mill employs the robust and powerful Roba-DS lamella pack coupling from Chr. Mayr GmbH + Co. KG from Mauerstetten. The coupling compensates for shaft misalignment and withstands the high loads permanently. 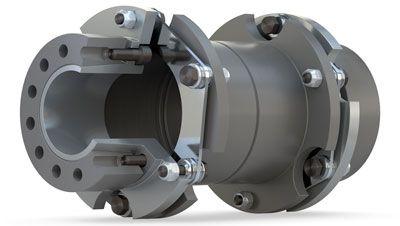 Sightseeing Trains as a subsidiary of the Jagdschlossexpress und Ausflugsfahrten GmbH can look back on many years of experience with small runs. "In the meantime, we do not only operate the railways but also produce them ourselves. This allows us to respond specifically to our customers' requirements. Each route has its own challenges and we want it to fit permanently for our customers, "says Stefan Krüger, describing the company's philosophy.

"The E-Lok is currently our dearest child. Wherever we go with them, people are skeptical, but after a short while, they are enthusiastic. "This is due to the unique technology and the high performance: the E-Lok with lithium-iron phosphate battery has a range of up to 150 km and offers a high pulling force with a torque of 850 Nm under constant load. "The great effort is not noticed by the locomotive, it is silent," explains Stefan Krüger. "The maintenance of the electric locomotives compared to our conventional diesel engines is about 35 percent. Customers can thus save up to two-thirds of the costs. "The E-Lok is also extremely easy to maintain. It is enough to recharge it overnight. The charging time at full discharge is approx. 4 h.

The patented Roba-DS lamella pack coupling transmits torque without backlash and extreme torsional stiffness and compensates for existing radial, axial and angular shaft misalignment. It ensures precise torque transmission and is robust, reliable and temperature-resistant. In addition, the shaft coupling is wear-free and thus reduces the necessary maintenance effort to a minimum. "We need a coupling that is durable and can be transferred without peaks and which can transmit high torques - especially in peaks," says Stefan Krüger, describing the requirements. "In addition, the axial compensation is important; The clutch overheats manufacturing tolerances. At the Roba-DS the overall package convinced us - besides the technology also service and price. " 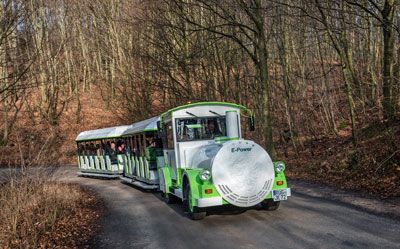 A high performance density plays an important role in couplings. High power density means small outer diameters, reduced weight and low moments of inertia. As a result, load changes can be carried out faster, the drive can be accelerated and decelerated in a shorter time. As a result of the lower mass to be accelerated, the operating costs and the handling and assembly of the clutch are also made easier. Compact size machines are also advantageous in compact machines where only a small amount of installation space is available. In addition, a compact and high-performance design also saves raw materials and material when manufacturing the coupling.

The nominal torque given in the catalog can be used without any restrictions for the lamina pack couplings used. There is no need to reduce the nominal torque due to displacement, load collective or balancing requirement. The couplings are compact, powerful and very small. In the case of suppliers, which must take account of displacements and alternating torques during dimensioning, a larger clutch must often be selected at the same nominal torque and also the same speed. At the same time, the Roba-DS combine high power density with absolute freedom from play. Design details, such as the blasting of the slats and the use of specially shaped flange bushings, ensure a play-free flow of the flow with very good flux density between the input and output.

The lamella pack couplings transmit torques up to the nominal torque absolutely free of play and with a constant high torsional rigidity. The shaft shifts specified can be exhausted in sum to 100% without affecting the transferable torque.

Picture above: Apparently effortlessly, the new electric locomotive masters great efforts. It offers a high pulling power with a torque of 850 Nm under continuous load.

Another contribution of the manufacturer Documentation Roba-DS This e-mail address is being protected from spambots To display JavaScript must be turned on!
Tweet
© 2010 - 2020 Designed and Powered by German Online Publisher