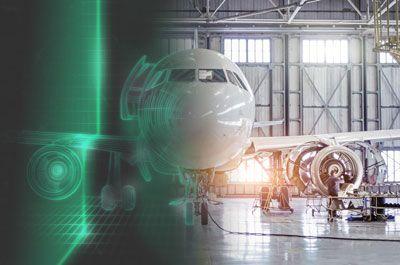 Just get on the plane a few hours later and get off again thousands of miles away: planes take us to almost every location around the world. Innovative scanning technologies from Pepperl + Fuchs can help make a plane not only comfortable, but above all safe.

Frankfurt International Airport, 05: 00 in the morning: Many passengers aboard the machine are still rubbing their eyes, it was a long flight. The day before they were all still in Shanghai, today they enter German soil again. Every day, countless people use the airway to travel quickly and easily to other countries and distant continents.

Never before have so many travelers - whether on business or pleasure - traveled by plane each year as they do today. At the major airports in the world, huge machines take off every minute or even every few seconds to bring people to every corner of the earth. But it is not just the timing that motivates people to travel by air: it is still considered the safest means of transport in the world. To keep it that way, airplanes are strictly controlled and regularly checked. Not the smallest part may be defective, because the consequences of a failure or malfunction in the air can be fatal. This applies to the electronic components that are installed in and on the aircraft in large quantities, as well as for the individual components of the overall construction.

Tons fly high in the air

Before a steel bird with a weight of several hundred tons can rise into the air, the greatest engineering, but also the highest precision, flow into the production. Because many conditions must be met in order to generate the aerodynamics that make an aircraft fly at all. For this reason, the flawless design and condition of the aircraft are essential. Cracks and bumps in the outside area, for example, can have a very negative effect on the aerodynamics of an aircraft and must be avoided at all costs.

One particular challenge is the sheer size of an aircraft. Even a single component such as the wing is several meters long, the fuselage is many times longer, and the turbines impress because of their considerable diameters. Thus, the assembly of the components of an aircraft is already a highly demanding matter in which millimeter precision is required. Technologies capable of detecting such large components in their full height, width and length can significantly assist aircraft manufacturers and maintenance personnel in proper assembly, quality control and periodic checks.

Pepperl + Fuchs offers the right technology for this task: A combination of several 2D Lidar sensors allows for an accurate recording of the assembly and maintenance halls as well as the aircraft and components contained therein. For this purpose, the precisely calibrated, high-precision sensors are positioned at different locations and thus capture the objects from different angles. The data sets of all 2D lidar scanners are fused into a three-dimensional point cloud, resulting in an exact, digital image. From this, the personnel can see exactly how the components are constructed and what positions they are in. This is helpful, for example, when machines and parts have to be positioned precisely when assembling the individual components in order to avoid damage due to collisions.

But even before the individual parts of an aircraft come together to form a whole, the system can support the manufacturers and their fitters from several 2D scanners. Because it is not uncommon for the individual components of an aircraft to be manufactured at different locations - it can happen that the fuselage is made in Germany, but the wings are made in France or in the USA. To ensure that the components fit together during final assembly, the scan data and the resulting 3D image can always be matched to plans and models.

Data in the cloud

The data collected by multi-sensor systems are immediately available in the Neo Neon Cloud of the Pepperl + Fuchs subsidiary Neoception in a standard data format. This means that the three-dimensional image of the aircraft or its parts can be retrieved anywhere in the world - given global distributed manufacturing facilities, this is a key advantage. Because not only the manufacturer of the sash itself can match the construction with the plan. The production sites of the other components also have access to the object scan and can use the 3D data for further processing, for example to optimize components or even base their own production.

Transferable to many areas

What works in aircraft is also helpful in many other applications. Intelligent multi-sensor systems with scanning technology can not only capture large components and entire rooms, but also accurately scan small and large objects, machines and people. The data merged into 3D point clouds is immediately available for further processing via the Neo Neon Cloud. So they are available anywhere in the world and can be used directly for production, for example - also individually in lot size 1. This makes it possible to flexibly implement customer requirements and requirements and enables companies with globally distributed production sites to optimize their system utilization and thus increase efficiency.