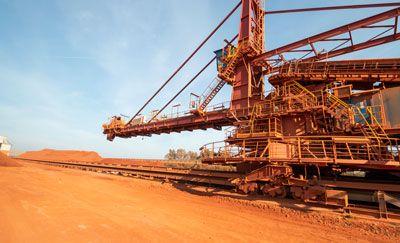 During the mining and subsequent storage of bauxite, a sedimentary rock for the production of alumina, a lot of dust is formed, which is a major challenge especially for the moving machine parts of the conveyor units. The alumina producer TO puts in his facilities energy chains from Igus on. For several years now, they have reliably supplied power units and stockpiles with energy, data and media.

Aluminum oxide and hydroxide are basic materials used to make a wide variety of aluminum products that are needed all over the world. The production of these substances requires bauxite - a reddish sedimentary rock that is mined primarily in Australia, China and South America. From there, it is shipped by sea to Germany, for example, to the Aluminum Oxide Stade GmbH (AOS), one of the major aluminum oxide producers in Germany. The company processes around 2 million t of bauxite annually, from which around 1 million tons of alumina can be extracted. 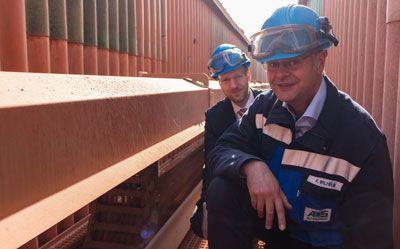 A single ship delivers up to 70.000 t of raw material to AOS 'own port. From there, it is transported by ship unloading crane via an encapsulated conveyor belt system for intermediate storage before it is processed from there. Both during loading and unloading of ships as well as during storage, AOS today relies on the conveyor units for reliable energy guidance systems from the motion plastics specialist Igus. Because the high dust load during the movement of bauxite is an enormous burden, especially for moving machine components.

"In the past, we used motor cable drums for the power supply," recalls Fabian Wilhelm, Head of Electrical Power Engineering at AOS. "Here again and again we had the problem that the lines were not drummed correctly, which resulted in machine failure due to line damage."

Initial skepticism is followed by trust

Since the previously used energy supply systems were very maintenance-intensive and always caused problems, Fabian Wilhelm 2012 opted for the first conversion to an energy chain system made by Igus. "At that time Herr Böhm von Igus introduced me to the principle of energy chains," he explains. "At first I was skeptical that the chains would work in this environment. However, after we were able to look at a seaport and an aerated concrete plant as reference applications and had the opportunity to talk to other customers and users, we decided in favor of the Cologne chains. "The references we have visited are - as well as AOS - in each case for applications with travels via 100 m or applications in coarse dust and dirt. In particular, the burden of abrasive salt dust in the seaport is very demanding for the systems. 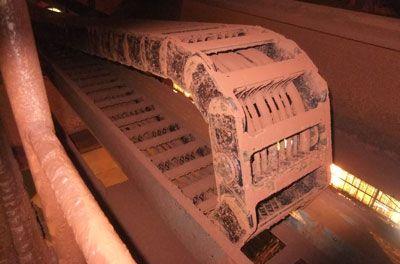 The first joint project was the so-called 'loop car'. When it comes to particularly dusty bauxite, it is not stored in a heap under the open sky, but in a large hall to reduce the dust load on the environment. In this hall, the loop car moves back and forth under the roof of the hall over a distance of just under 140 m, in order to vary the discharge point of the bauxite. While there are up to 60 ° C in summer, the winter conditions are much more difficult.

"If the warmer bauxite from 20 meters height is transported to the cold heap, the temperature difference causes condensation," reports Fabian Wilhelm. "This rises and becomes liquid again on the roof of the hall, which causes it to start to rain inside the hall. Moisture coupled with the bauxite dust results in a stubborn slag that sticks everywhere and also affects the path of the energy channel. "This is where the Igus energy chain system adds another benefit, as all AOS applications also include electronic traction / thrust monitoring is installed.

"If the run of the chain is hampered too much by dust and dirt, the train / thrust monitor will shut down the system before any damage occurs," explains Fabian Wilhelm "Since Igus was the only provider to offer such an electronic surveillance system This is one of the main reasons for the contract. If today the monitoring turns off the system, we know that it is time again to clean the chain travel. Then the system will run again without any problems. "The option of being able to carry compressed air in addition to data and energy was another convincing factor. 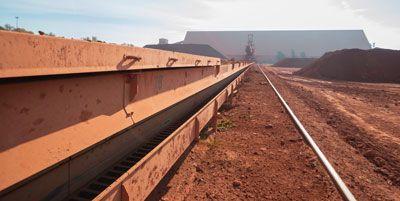 Only a short time after the first successful retrofitting AOS decided in the course of a major overhaul of the dumping device again for an energy chain system from Igus. Here - under the open sky - lands the bauxite, which does not have to be stored in the hall. Also in this project AOS relied on the support of the Cologne assembly service, which has taken over the complete installation of the chain and the gutter system in which the chain is moved. "The special feature of all projects here has always been the good cooperation with the customer," explains Markus Böhm, Technical Sales Advisor at Igus. "The work was very well intermeshed and if the assembly work required mutual support, it was perfectly implemented." 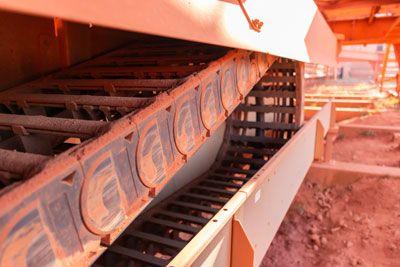 The stockpile will now be supplied by the longest e-chain in use at AOS. A 330RHDAX roller energy chain travels on a traverse path of 5050 m. "By rolling in the chain links, the pulling / pushing forces on long travel paths drop enormously when the upper run of the chain drops on the lower run," explains Markus Böhm. "This reduces the coefficient of friction and can save up to 57 percent of the drive energy required to move the energy chain system." The 'AX' in the product name stands for 'outboard stops'. The fact that the attacks are not as usual inside between the chain links, the dust can not settle so much in the attacks. Because this could possibly influence the bending radius of the chain and lead to failures.

In addition to various lines for the supply of energy and data, which are also produced by the plastics specialist and have been specially developed for use in e-chains, there is also a water hose with 48 mm diameter in the chain at the stockpile to irrigate the bauxite. In addition, a floating carrier ensures a lateral tolerance compensation and ensures undisturbed movement. Especially on long travels this is necessary in order to save on the one hand drive energy and on the other hand compensate for possible parallelism errors between running rail and guide trough. 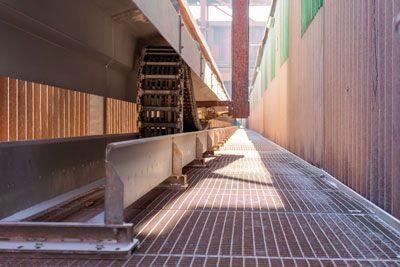 In the most recent joint project in 2017, two energy chains travel in opposite directions in a common channel on a traverse path of 218 m. They supply the two cranes that deliver the bauxite and remove the produced alumina. Here, among other things, medium-voltage motor cables of the "Cfcrane" series are routed, as well as fiber optic cables of the CFLG series. "This is a real advantage for us," affirms Fabian Wilhelm. "Previously, in the event of crane failures or maintenance, we always had to first load 40 meters onto the crane with a laptop for reading. Today, thanks to the fiber-optic connection, this is done directly from the desk. This enormously facilitates the maintenance work. "

Motor cable drums have also been used in these two applications in the past. However, these caused problems again and again because here standstill motors had to be operated, which always kept the lines of the motor cable drum to voltage. "In the past, the starting resistors on the engines used to rust over and over again and had to be replaced," recalls Fabian Wilhelm. "This meant a ten-day shutdown. And we only have one unloading crane that can handle the roughly 50 ships per year. Therefore, a failure naturally weighs very hard and must be avoided at all costs. Today, of course, we have a longer service life thanks to the energy chain systems and significantly less maintenance effort. " 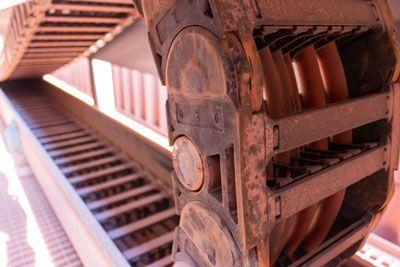 Maintenance at AOS is also carried out by Igus experts. "Once a year, we check all the chains according to our maintenance manual and carry out visual inspections," explains Markus Böhm. "The first chain on the loop car has been in use for over five years now. Here at the last inspection we did not notice any significant signs of wear - despite the very heavy conditions under the hall roof. "This also applies to the other systems in use. In addition to this, Fabian Wilhelm summarizes: "Less maintenance, higher availability, the possibility to run all different lines and hoses in one system, the electronic traction / push force monitoring ... all these advantages convinced us completely of Igus. I would take these energy chains again and again. "