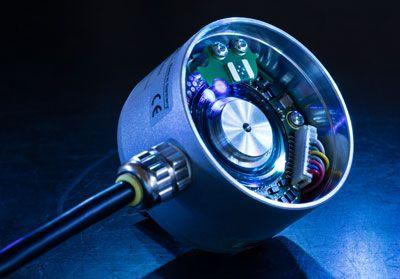 In daylight, the cool blue shimmer is hardly perceptible in the metal interior of the screwed-on device. Only on closer turning and turning can one recognize its origin, a focused light cone, just a pin-head. However, the remarkable effect of this small blue point is not to be dismissed. Behind it lies the so-called "Bluebeam technology" of Pepperl + Fuchs.

Matthias Padelt, Managing Director of Pepperl + Fuchs Drehgeber GmbH, quantified the effect of the new Bluebeam technology, which the automation specialist presented to the public at the Hanover Trade Fair in concrete terms: "Phase A: B far below 10 percent." Talking to him, Thorsten Gippert, Head of Innovation Management and Stefan Horvatic, Head of Product Management, can clearly feel how much passion they have put into the past few months Series ENI58IL have flowed, in which the Bluebeam technology is now used for the first time. Horvatic uses a pen to point to the open incremental rotary encoder in front of him: "This sets a new benchmark for signal quality on the market." 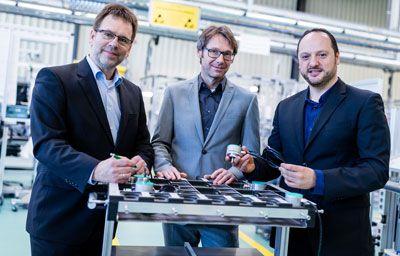 This is successful for the team through the implementation of a blue send LED and the corresponding receive diodes. In conjunction with a powerful scanning chip, a significantly better utilization of the light is possible than with commonly used infrared technology. However, on the way there were some hurdles to be overcome:

Thorsten Gippert recalls: "It was not an easy task to select the right scanning chip. It took some time to research, until we found a model that met our exact requirements. "As a result of the effort, the three now enjoy the reduced jitter, higher resolution, and greatly improved signal amplitude.

In order to further increase the enormous measurement quality thanks to the Bluebeam technology, the adjustment of the code disc has also been refined compared to the usual methods. "For the ENI58IL series, we are following a new path: Here, the precise insertion of the glass during the manufacturing process is checked microscopically. This step leads to an improved absolute accuracy of applications in which even the smallest deviations cause noticeable power losses - such as the ideal alignment of a rotor blade to a wind turbine ", Matthias Padelt outlines the advantages. 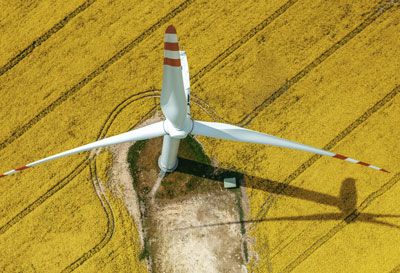 With this in mind, it is not surprising that during the development process, the team also worked intensively on longevity and process safety. In addition to the EMC protective circuit, this is supported by the robust design with a blocked bearing unit, which can cope with permanently high bearing loads and prevent the ball bearings from being pressed out. In addition to this powerful blocking, however, the filigree Bluebeam technology also has positive effects on process reliability. "With Bluebeam, the signals are consistently high under mechanical conditions such as shocks or vibrations, as the high-frequency sampling offers more tolerance to such interference," explains Stefan Horvatic, the welcome side-effect of the innovation.

So, is ENI58IL an exclusive series exclusively for extremely demanding applications? Thorsten Gippert emphatically negates this: "On the contrary - we pack the performance for high-performance applications into a series of encoders for use in the field. With a sophisticated standard rotary encoder, we cover scenarios that previously could only be solved with special devices. This is also reflected in the breadth of the available portfolio. We have almost all types of shafts, flanges and connections here. "Stefan Horvatic adds:" With ENI58IL, users receive innovation and reliability as standard, worldwide and even in the smallest quantities. "

After the final stages of the product launch, the question remains for the three, which is next on the agenda. Matthias Padelt does not have to hesitate for a long time: "Now we are curious to see how our customers accept this range of encoders. At the same time, we continue to face new challenges. So much can be said: The Bluebeam technology will certainly be used for future developments. "

development scout TV - Lecture Another contribution of the manufacturer CAD-files This e-mail address is being protected from spambots To display JavaScript must be turned on!
Tweet