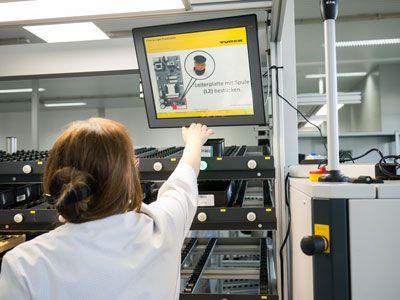 More ergonomics, faster processes and lower costs - that's the result of a process optimization that Turck in Halver realized for the manual assembly of electronic boards. Instead of Royonic tables as usual, the employees now equip the circuit boards with two Pick-to-lightWork stations. The new solution was planned and implemented by Turck subsidiary Mechatec in close collaboration with Halver's production planners.

Depending on the size of a circuit board and the number of components to be assembled this placement process can be very complex. For process and quality assurance, so-called Royonic tables are frequently used in the THT assembly of printed circuit boards. This was also done in THT placement at Werner Turck GmbH in Halver. The Royonic table uses a light pointer to indicate to the employee the position on the printed circuit board on which the respective component must be fitted. As a rule, 8 to 15 are similar PCBs in a transport frame. After each insertion of a component, the employee presses a confirmation button on the table.

In the context of the practiced KVP process at Turck, production processes are repeatedly reviewed. In the case of THT placement with Royonic tables, work preparation came to the conclusion that this type of assembly required cost and process optimization. The process experts in Halver calculated that employees spent a total of 240 hours a year alone pressing the confirm button. It was also not efficient that the frames with the printed circuit boards had to be manually lifted by the employees onto a conveyor belt to the soldering wave. Overall, a lot of potential to increase the efficiency of THT placement.

For Alexander Kohlhaas, an expert in manufacturing technology in Halver, it was clear that the Royonic tables for printed circuit boards with up to 15 components are not optimal. Initial ideas led to the choice of a pick-to-light solution with in-house system components. In addition, the frame transport should be automated. The employees are thus relieved of carrying the frame and the production optimized. The process runs smoother, and the logistics processes, such as the filling of components, should no longer interrupt the assembly process, but should be imposed by the logistics staff. 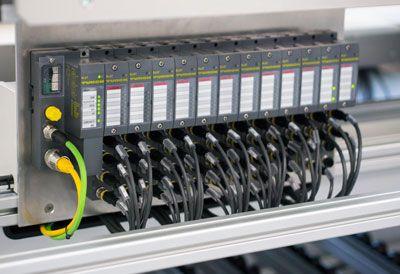 Kohlhaas developed the idea for a THT workplace based on a pick-to-light system in cooperation with Natalie Krumme, then a mechatronics apprentice. After the production planners had defined the requirements for functionality and ergonomics of the application, a subsidiary company came on board: Turck Mechatec offers complete electrotechnical system solutions according to customer specifications from planning to turnkey handover. The Mechatec specialists have developed a system solution from the requirement profile and implemented it both ergonomically and cost-effectively.

With its pick-to-light solutions, Turck has already equipped manual assembly and picking stations for numerous customers. Mechatec was therefore able to draw on the extensive wealth of experience of the automation specialist in its system planning and to combine the optimum individual components with a software developed especially for the THT application in Halver. The software not only controls the process but can also capture the productivity of THT placement and visualize it via a separate monitor. By means of the data collection, further starting points for optimizations can be identified in a later analysis if necessary. On the hardware side, two HMI / PLC systems, a BL67 I / O station as well as various sensors and illuminated pushbuttons including connecting cables are being used at the new assembly locations. The employees now have two ergonomically designed pick-to-light shelving systems that can be equipped with up to 48 compartments for components to be installed. 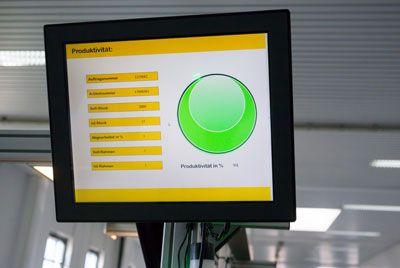 A loading process begins with the insertion of the empty boards in the frame carrier. At the big one HMI / PLC screens The individual work steps are displayed visually and the next component to be assembled is displayed with the position and the mounting position on the board. The display on the monitor also serves as a work instruction. This eliminates the need for training, and the possibilities of using production staff become more flexible. Parallel to the display on the monitor, an activated luminaire signals the shelf space from which the employee must remove the currently installed component.

After the employee has loaded the component on the board, she actuates this operation by touching the capacitive pick-to-light sensor and the visualization on the monitor indicates the next placement position. The pick-to-light sensor with the next component to be removed lights up on the shelf units. When the boards are complete, the employee pushes the frame onto the conveyor belt. The frames with the printed circuit boards are automatically driven over the conveyor belts to the soldering wave and then back to the workstations. There, the employees take out the assembled and soldered circuit boards and fill the frame with empty blanks for the next round.

The shelves are constructed in such a way that they can be filled with new components from behind without interrupting the loading process. The producing employee is thus relieved of logistics tasks and can concentrate on her actual placement task. The two shelves are also progressing ergonomically. Instead of lifting the assembly frame, which weighs around 8 kg, from the belt for assembly, a conveyor belt now guides the frames with the printed circuit boards to the employees. You only have to push the frame briefly until it is caught by the conveyor belt and transported to the soldering wave. 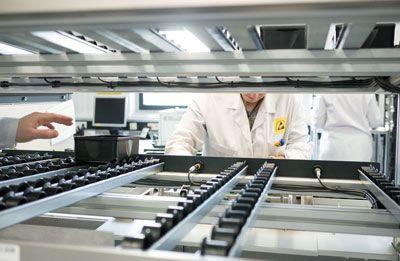 All necessary preliminary work for the assembly of new products can now be carried out externally by the work preparation. A CSV file is used to describe the overall process and determine the process flow. In addition, the production planners can specify whether the work center is used by one employee or two employees in order to shorten the turnaround time of the products. Once the new product is started, only the CSV file including images in the IPC and the BL67 station must be loaded. In the future, the solution can easily be connected to the new ERP system.

Initial experience shows that the Pick-to-Light optimized placement process at full capacity provides a significant increase in production at the workstations. The Lötwelle is busy today continuously and evenly. Interruptions to the process, as they used to be when refilling components, were largely eliminated. Thus, the error rate could be reduced because interruptions in the assembly process are always sources of error. The bottom line is that the investment in the optimized system will pay for itself quickly.

The author Rudolf Wolany is Head of Sales + Projects at Turck Mechatec in Mülheim an der Ruhr.
Another contribution of the manufacturer This e-mail address is being protected from spambots To display JavaScript must be turned on!