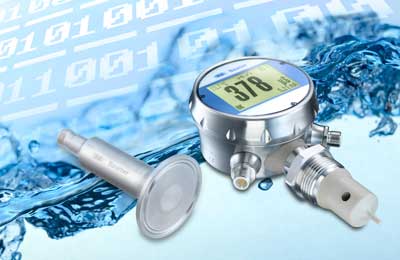 Sensors that deliver reliable and precise measured values ​​can create real added value with IO-Link. Baumer provides for greater flexibility Dual channel sensors in front. The pressure sensor PP20H and the conductivity sensor Combilyz AFI from Baumer offer IO-Link interface interesting additional functions. For example, they can be parameterized quickly and easily - even during operation. Thanks to the dual channel, the sensors can be operated simultaneously, digitally or via the respective channel.

The conductivity sensor Combilyz AFI and the Pressure sensor PP20H dual-channel principle can therefore be operated in classic control topologies and in a digital IO-Link control concept, depending on which channel is required. The analog interface is still useful for process automation if users want to connect the sensor to an existing controller. The advantages of IO-Link come into play when the sensor is started up. Users can parameterize quickly and easily or use the additional data. For process control, the conductivity or pressure values ​​can be read out in parallel via a 4… 20 mA analog output.

By IO-Link valuable additional data is transferred for monitoring. Process data include the temperature value of the sensor or, for the PP20H, the process temperature. Interesting conclusions can be drawn from this as to whether there is an unusual rise in temperature in a pipe or container. This enables, for example, monitoring for predictive maintenance. In addition to the conductivity of the media, the conductivity sensor provides information about their concentration values. This allows you to determine exactly which medium is in the process and in what concentration. In addition to the process pressure, the pressure can be used to determine the ambient pressure. The sensor can thus be used for absolute and gauge pressure measurements.

The sensors can communicate bidirectionally with each other via IO-Link and the controller. Measured values ​​from one sensor can thus be used in another sensor. This enables complex measurement tasks to be solved and processes to be optimized. The conductivity sensor can access the measured values ​​of a temperature sensor in the machine, which means that the response time of the temperature measurement for temperature compensation can be shortened by 15 s or even completely avoided. When measuring the level in closed tanks, the level status can be shown directly on the DFON display by combining the measured values ​​from two pressure sensors. For this purpose, the status of the pressure sensor for head pressure measurement transmitted via IO-Link is transmitted to the sensor on the tank bottom in order to adjust its zero point. This enables the pressure in the tank to be determined.