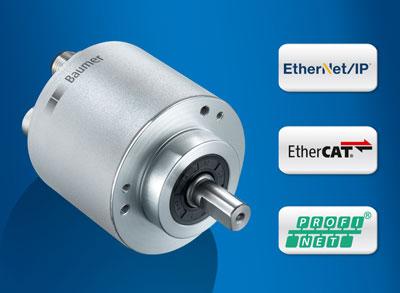 Baumer Magnetic encoders there Series EAM580 / 360 work particularly reliably and precisely. The magnetic Absolute encoders work with an angular accuracy of ± 0,15 degrees and thus enable precise positioning in the application.

"No competitor product with comparable robustness and durability can reach the EAM580 / 360 in terms of absolute angular accuracy," emphasizes Daniel Kleiner, Head of the Industrial Encoder Business Unit. According to Kleiner, with this generation of robust magnetic encoders Baumer emphasizes precision in terms of a dimension that was previously reserved for optical encoders. »The series also offers the integration of efficiency-enhancing interfaces.

The secret behind the high precision and robustness of the Baumer encoders lies in the patent-pending double magnet arrangement and the interaction with a powerful, energy-efficient microprocessor as well as sophisticated signal processing algorithms for the conversion, filtering and interpolation of the measured values. "Magres" encoders use magnetoresistive (MR) technology. This provides two signal periods per revolution and thus twice as many as the Hall sensors, which are usually used in the encoders of other manufacturers. And all this Baumer has packaged shock and vibration resistant.

When developing the EAM series, the sensor specialist benefited from the fact that the company not only co-invented the basic principles of magnetic encoders, but that the company has been working very successfully in this field for two decades now and the Magres encoders are already working in the 4. Generation gives. Due to their high accuracy, the encoders are even suitable for use in medical devices. For example, in patients' recliners of X-ray machines and CT scanners, they ensure the exact positioning of patients during treatment. Because here, the fraction of an angular degree can be decisive for the success of the treatment. But even with countless applications from industry, the precision of the EAM 580 / 360 encoders determines "how efficiently and effectively the entire application works".

In addition to numerous fieldbus interfaces, Baumer also offers the highest variance of real-time Ethernet interfaces such as Profinet, EtherCAT and Ethernet / IP. This greatly simplifies device integration for the users. Above all, however, Link Layer Discovery Protocol (LLDP) for proximity detection and Media Redundancy Protocol (MRP) or Device Level Ring (DLR), which secure the transmission of data to the controller even if it is interrupted in one branch of the network, are increasing, among other things. the availability of the facility.

OPC UA standard for the Internet of Things

The OPC UA communication standard is also supported. This ensures a feedback-free and secure data exchange between different systems. The open and platform-independent standard can also be easily adapted to future requirements. This equips the EAM580 / 360 encoders with the requirements of the industrial Internet of Things (IIoT). If necessary, they diagnose data such as position, speed, temperature and operating hours. This allows users to optimize their processes and improve the design of machines and systems.