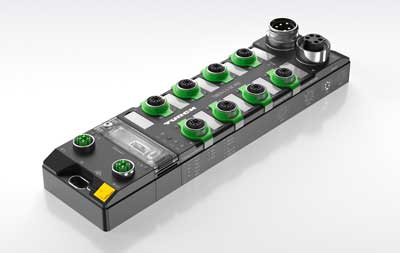 Turck has a compact 10 port managed Ethernet Switch in protection class IP67 presented. With the robust TBEN-L-SE-M2 switches, camera applications, for example, can be significantly accelerated due to the highest data rates up to 1 Gigabit / s. A high-speed link-up function supports fast tool changes in less than 150 ms for minimal cycle times in the Robot. The Ethernet switch can be installed decentrally directly in the field.

This is how the switches reduce the Wiring effort of cables etc. between the control cabinet and Ethernet participants on the machine. The TBEN-L switch thus allows the consequent Modularization in mechanical engineering.

The manageable Ethernet switches from Turck have numerous functions for the safe and efficient organization of industrial Ethernet networks. The integrated firewall protects bidirectionally against unauthorized access and thus increases security in the IIoT. A NAT routing function enables the representation of the subscribers under alternative IP addresses in higher-level networks. This prevents duplication of the IP addresses in the user's network on the devices. The Port based IP address assignment allows the assignment of subscriber addresses via the switch's web browser.

Using media redundancy RSTP, the switches can increase the availability of lines. Users can go through the facility virtual networks Separate VLAN production from management networks or assign individual bandwidths per VLAN. This is how they protect the network from overloading due to broadcast floods. The network load monitoring at each port always shows an overview of the bandwidth usage in the network.

The 1 Gigabit / s switches with their 10 ports are suitable for the production lines of Automotive industry, the Intralogistik and Agriculture. Thanks to multicast, the Ethernet switch supports the automation of agricultural machinery.