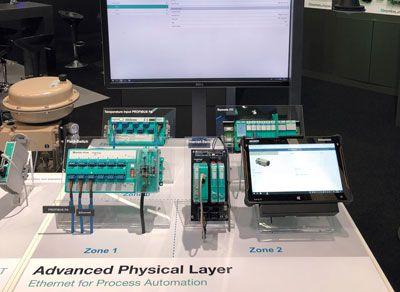 "Ethernet for each field device" promulgated Pepperl + Fuchs on the trade press days in Karlsruhe. At the last Namur Annual General Meeting, this vision was clearly communicated by the users. It points the way to Industrie 4.0 in the field of process automation, as a field device with Ethernet connection enables seamless integration without protocol converter from the cloud to the hazardous area, Zone 0.

Michael Kessler, Executive Vice President of Components + Technology, Pepperl + Fuchs, believes that the time is ripe for now Ethernet APL and has the vision that all field devices in process automation will be Ethernet-based in the future. The innovative physical layer is identical for all protocols and thus openly designed. For the first time, it will enable the use of modern Ethernet technologies in the harsh environmental conditions of process plants. In the APL project, the leading associations Fieldcomm Group, ODVA and Profibus and Profinet International as well as eleven automation manufacturers, including Pepperl + Fuchs, are working together to develop it.

The new IEEE standard, chapter 802.3cg is available as a stable draft. Insiders expect a release before the end of the year 2019. This IEEE standard defines the communication of 10 Mbit / s, full duplex - three hundred times faster than previous technologies - over a two-wire line including power supply. The cable length may be up to 1000 m.

The working groups attach particular importance to defining only one common standard for Ethernet in the field of the process plant. This concerns compatibility in all aspects: from cables and connections to power supply to explosion protection.

Through reflection and discussion with end users, the working groups create concepts that ensure ease of use and plug-and-play interoperability. This includes certifications of the individual devices and the definition of profiles. In the context of Ethernet APL, evidence of intrinsic safety similar to Fisco emerges, which users greatly appreciate for its simplicity. Currently a working group is founded to supplement the associated IEC standard IEC60079. Through their active participation in the committees, the experts from Pepperl + Fuchs support standardization. In-house R & D activities lay the foundations for switches and network infrastructure in the field of process equipment.

Customer magazine Amplify This e-mail address is being protected from spambots To display JavaScript must be turned on!