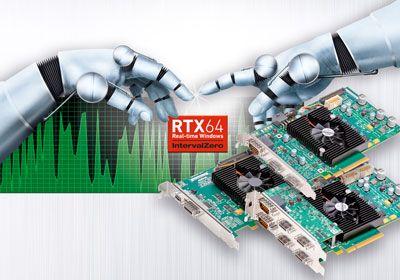 Within a few years, the sales figures of consumer-oriented camera interfaces GigE Vision and USB3 have exploded in image processing, even if USB3 currently still at the beginning of the ramp-up here. As a logical consequence falls at first glance looks at the spread and acceptance of classical, frame grabber oriented image Constitution. Nevertheless, Matrox Imaging (Sales Rauscher) now a newly developed PCIe Frame grabber series before.

Of course, there is still a significant market for frame grabbers. Particularly demanding applications, which were considered insoluble just a few years ago, are often associated with the demand for maximum performance, stability and response. They often require dedicated image processing hardware and software.

That's why Matrox Imaging introduces a newly developed PCIe frame grabber series for the Camera Link, Coaxpress and Camera Link HS interfaces. But where are the advantages of these frame grabbers and in which markets and applications does the use of an additional hardware component make any sense at all?

In harsh industrial environments, the use of consumer-oriented interfaces is not always easy: connectors screwed on both sides, long cable runs, industrial cable bushings, robust shielding against EMC influences and especially the long-term availability of all components is often required. Although GigE and USB3 Vision solve most of these topics more or less well, especially the long-term availability of the interface on the PC side is a big problem. GigE and USB3 chipsets for PC interfaces change quickly and often without notice - a guarantee for availability and consistent performance and compatibility is not given.

Unlike Matrox frame grabbers: An availability of more than 7 years is guaranteed. Currently even an analog frame grabber from 1998 is still available. OEMs that bring long life and service time to market benefit from Matrox Imaging's longevity and comprehensive lifecycle management.

The data bandwidth factor is one of the key metrics for each interface: Sensor technology is inexorably on the move, and image data only grows with the increase in pixel resolution, readout speed, bit depth, and number of color channels (keyword: multispectral cameras). In terms of transfer performance, frame grabbers are still unbeaten: Camera Link, Coaxpress and Camera Link HS far exceed the framegrabberless interfaces. This is particularly interesting for applications based on cameras with the latest high-resolution, fast sensor generation from companies such as On Semiconductor, Cmosis, e2v, Dalsa.

In areas such as semiconductor, flat-panel, print, a huge amount of image data is simply generated and processed. The Matrox Radient eV boards are designed for this purpose, the technical basis is identical for each interface: With powerful FPGAs for data handling, LUTs, Bayer conversion and color space conversion, the 1 to 4 GB onboard memory and the super fast PCIe x8 Gen 2.0 interface afford up to 4 GB / s data throughput. Only the grabber frontend differs from version to version: 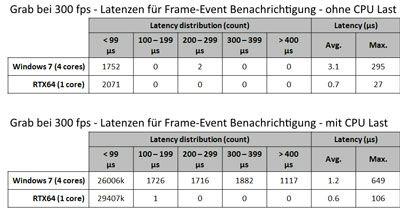 But not only the overall throughput is crucial: In other applications, the main focus is on having the image data available quickly and deterministically for evaluation: For example, in AOI systems in electronics production, the frame rate is not consistently high. Rather, a series of images is taken as quickly as possible under different lighting conditions. Speed ​​and real-time are particularly important as the mechanics immediately approach the next test position. With several thousand inspection positions, a fast, latency- and jitter-free sequence acquisition significantly increases the overall throughput of the inspection system.

In image processing, Windows is the most widespread operating system. In the fast, stable and jitter-free image acquisition is thus a great challenge. Windows is not suitable to send commands in milliseconds (to camera or grabber) or even to process. This is where the many parallel processes interfere, which are prioritized via the Windows Scheduler and can cause unforeseen latencies of up to 500 ms.

Matrox offers two approaches to overcome this obstacle: On the one hand, there is a special Burst Grab fashion. This onboard frame accumulator starts a high-speed capture by sending a software command - the frame grabber grabs the grabs, queues, and switches the image memory areas without the intervention of the operating system. Thus, for example, a recording frequency of> 50 kHz can be achieved stably and without loss of frame on the Radiant eV Coaxpress.

Because the Windows Scheduler also prevents reliable, high-frequency and latency-free notification of events such as the presence of new image data for processing in the other direction, Matrox supports on all Radient eV frame grabbing the Intervalzero Windows RTX64 real-time extension. RTX64 is a Symmetric Multi Processing (SMP) extension that transforms Windows into a RTOS Real-Time Operating System.

By decoupling Windows, the image processing runs under a true real-time core and guarantees deterministic response times at the highest frequencies. Since Matrox Imaging fully supports the RTX64 environment for the new Radient eV Bords, true real-time systems can be built with maximum determinism even under the well-known Windows.Another contribution of the manufacturer This e-mail address is being protected from spambots To display JavaScript must be turned on!