3D data with fourth dimension for industry 4.0 from quantity 1 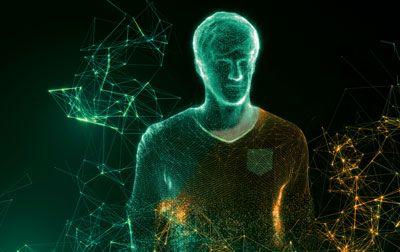 The original idea of ​​this new development comes from the aircraft industry. There, high-resolution 3D measurement with laser scanners is used to precisely connect components, for example. Pepperl + Fuchs showed the potential of this technology for applications in the sense of Industry 4.0 and brought another dimension of measurement into play.

2018 founded Lufthansa Technik and Pepperl + Fuchs together in Hamburg the 3d.aero GmbH. The aim of the joint venture is to develop new automation solutions for the aircraft industry and to advance the digitization of production. Among other things, the focus is on applications for optical measuring devices. For example, multiple devices can be combined with optical time-of-flight measurement techniques to create 3D imagery of components and their mounting locations, and use this data to enable high-precision automated assembly. The same technology can be used to control paint robots or to position the passenger bridge in front of the car door. Because of the arched hull their precise approach is not a trivial task. At the same time, small collisions must be reliably prevented because of the strict safety regulations. 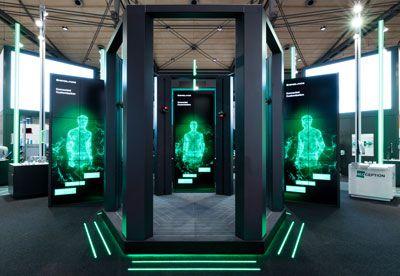 From the experience of such applications came the original impulse to continue the 3D detection of objects in the sense of the industry 4.0 and to exhaust their technical possibilities, also on the level of information comprehensively. As a trial version, the exhibition exhibit "Connected Customization" was created, in which visitors to the fair make themselves available as "objects". This is initially using the PRT method of six optical distance sensors of Laser series R2000 detected. Each sensor makes an 2D scan of the subject, and the measurement data is then merged into a 3D point cloud.

Pulse Ranging Technology (PRT), which uses the R2000 sensors, is a true time-of-flight technique. A laser diode emits light pulses with a beam diameter of only a few millimeters. From the reflection time, the scanner calculates the exact distance. The pulses have a high energy density and deliver correspondingly clear and accurate signals. This is true even with disturbing influences such as reflections, strong extraneous light or dark, poorly reflective target objects. The device transmits 250.000 distance readings per second to the controller.

The advantages of Pulse Ranging Technology are complemented by the rotation of the 360 ° measurement module. This circles on a rigid axis and creates a uniform scan plane with virtually no angular deviation. Thus, the sensor achieves not only complete visibility, but also an angular resolution of up to 0,071 °. Its rotation frequency can reach up to 30 Hz, the measuring rate up to 54 kHz. It reliably detects even moving objects and very small objects. R2000 sensors are commonly used for collision protection, range monitoring in automated guided vehicles, or for detecting objects close to a surface. By combining several devices, a precise image of three-dimensional contours can be obtained.

Last year, the exhibit was expanded. In addition to the sensors, additional color cameras were mounted. Their images complement the distance data with the image information of brightness, color and contrast. This data exemplifies a "fourth dimension" that can be added to the 3D image and add value to accomplish different tasks. Instead of cameras, other devices such as temperature scanners could be added. They could be used to create a high-resolution temperature profile or track the temperature profile.

For the assignment of the measured values, however, the combination of the sensors involved, including precise 3D calibration, is a decisive prerequisite. Only in this way can the data be combined into a meaningful overall picture. The cloud of points is available for worldwide access in the Neo Neon Cloud of the Pepperl + Fuchs subsidiary Neoception. The data is provided in the standard format Point Cloud Data (PCD). Tools for processing PCD sentences are available on the Internet.

Immediate use on the smartphone 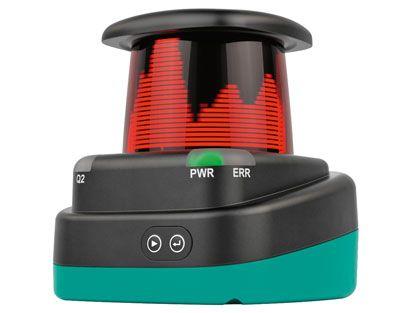 The trade fair exhibit demonstrates global data access and a first use: the visitor can immediately view his 3D image on his smartphone, the visualization takes over an augmented reality app, which can be called up from the app stores. For the access to the data a QR code is scanned, with the app one then scans the position marker of the exhibit. Those who get involved with this experiment could look at themselves from all sides on their own mobile device in 3D and in color. Depending on the trade fair appearance, there were also other possibilities, for example, to produce an 3D image in Plexiglas or to be printed as an 3D model on the title page of a personalized edition of the trade fair magazine. Of course, the same data can also be used for feeding into a production or logistics process.

The overall constellation of the exhibit Connected Customization meets the three basic requirements for an industrial 4.0 architecture: First. The integration of the devices involved provides the horizontally networked basis, which depicts reality with great depth of field. Secondly. With the provision of standardized data on the Internet, vertical networking is realized. Third. This creates the prerequisites for a consistent engineering process without media disruption. The information depth of the data enables very fine-tuned solutions for highly complex applications, such as machine control, 3D printing or navigation. They also allow a differentiated, individualized production from batch size 1.

The exhibit Connected Customization shows how high-quality sensors can be used to create a deep-focused, multi-dimensional image of reality in real time. The accumulated measurement data are available horizontally and vertically networked for consistent engineering and for automated production processes in a standard data format globally. They can be used without restriction for applications in the sense of Industry 4.0 and IoT.

developmentsout TV - Interview Customer magazine Amplify This e-mail address is being protected from spambots To display JavaScript must be turned on!