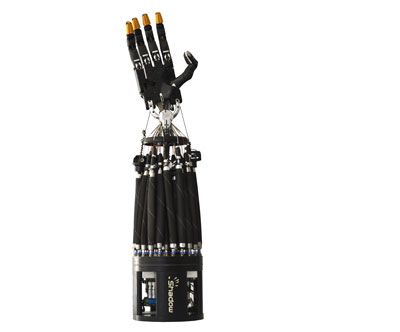 Previously responsible for the rough, collaborative robots “Cobots“Take on more and more jobs in the future - side by side with people. Harting shows in cooperation with customers and partners different scenarios and technologies "with instinct".

"For Luke of Papa" is written on the little yellow box. Shortly before, the Kuka lightweight robot put the white Siku car with Harting imprint there. Another Kuka robot drives it - past the trade fair visitor - to the next production cell, where the second vehicle is already waiting for Lukas. Papa placed the order days ago in the specially designed web configurator and triggered the order at the Hanover Fair at the Harting stand via a QR code on his mobile phone.

The smart factory "Haii4you" demonstrates on the toy car the completely vertical integration from the customer to the flexible production of a product, divided into self-contained, yet fully networked production cells. The activities in each manufacturing cell are carried out by a collaborative Kuka lightweight robot. The transport of goods between the cells takes place via a mobile Kuka Iiwa robot.

Perfact Innovation, partner company in the Mica Network, has also created digital twins of the system and robots. This generates a digital image of production processes, with the help of which remote maintenance and condition monitoring are visualized and simplified. The company Expleo reads the power moments of the robotic grippers to detect signs of wear. To do this, the data in the Microsoft Azure Cloud is evaluated and compared with historical data. The system thus demonstrates the full range of modern production methods and connectivity in line with the "Integrated Industry - Industrial Intelligence" theme.

A workplace for the intelligent, collaborative assembly of small parts is the business model of MTEK. The young company from Sweden shows an assembly workstation with a collaborating robot. The two-armed ABB robot can detect and grasp small objects and is used for assembly and handicraft activities side by side with people.

MTEK's business model is a software-as-a-service for process execution and control. "Mica and RFID turn the assembly workstation and process into an integrated unit with complete traceability," says Olaf Wilmsmeier, RFID Business Development Manager at Harting, about the cooperation with the Swedes. Wilmsmeier supported MTEK in the integration of UHF RFID technology and already knows the company from the joint project of the "Factory in a Box" from Nokia, which was one of the audience highlights at last year's trade fair. 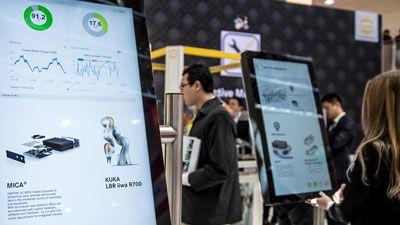 Meanwhile, researchers are working to further develop the gripping processes of robotic arms and grippers and to enrich a haptic perception. How advanced technologies are in this area is shown by Harting in cooperation with Shadow Robot Company Ltd. The British company has designed a robotic hand in the function and dimension of a human hand to develop algorithms for the simulation of human gripping. The hand has 24 joints, from which 20 can be independently controlled. The ability to rotate in all directions gives a precise and reliable grip on the objects.

Multi-functional sensors have been integrated into the fingertips to measure different functions such as pressure sensitivity, temperature and vibration. The finger tips of the robot hand are produced by Harting AG Biel in Switzerland using the 3D-MID technology (Mechatronic Integrated Device). This makes it possible to equip sensor functions directly on a three-dimensional base body.