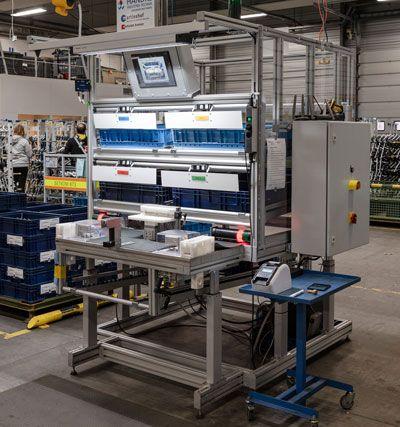 The Martinshof, Workshop for people with disabilities, preferably works with Manual workstations, because they are perfect for integrating people with physical or cognitive disabilities into working life. The Japanese “Poka-Yoke” principle and the Guided Operator Solutions (guided manufacturing solutions) from Mitsubishi Electric ensure the high quality.

The Martinshof is a department of Workshop BremenWith 2200 jobs, it is one of the oldest and largest manufacturing facilities for workers with and without handicaps in Germany and at the same time one of the largest employers in the city. In addition to contract and contract manufacturing in the areas of metal and woodworking, electrical assembly, filling and packaging, Werkstatt Bremen employs 500 workers in the automotive business area alone and has been supplying a local automobile manufacturer for more than 30 years.

Handke Industrie-Technik, long-time supplier to the Bremen workshop for the furnishing of the manual workstation and premium solution partner of Mitsubishi Electric, recognized the special potential. Together with Mitsubishi Electric, they developed this poka-yoke solution in the area of ​​customized work. The Japanese Poka-Yoke principle is based on the systematic exclusion of human errors in the workplace. The prototype of the flawless manual workstation convinced the customer across the board and was adopted in production. Since May this year, a total of four identical zero-defect workplaces have been produced for the large batch sizes in automobile production. 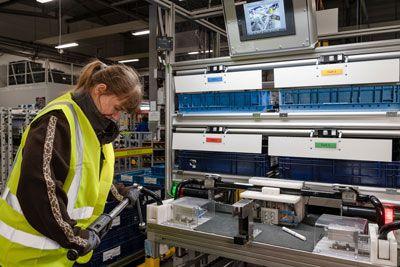 In three-shift operation, torsion bars (chassis components) are preassembled in large batch sizes at the assembly workstation, transferred to a buffer store and from there delivered just-in-sequence to the assembly line of the car manufacturer. In the assembly process, smaller stabilizers are screwed to the right and left of the torsion bar, which look very similar, but must never be interchanged.

“In the past, we always had to carry out a very complex manual final inspection by hand to avoid confusion. From the outset we now have the certainty that we are not delivering the wrong components and can save on the manual process step, ”says Miriam Berger, work preparation workshop in Bremen.

Structure and function of the manual workplaces

The new manual workstations each consist of a frame of aluminum profiles with a hydraulic height adjustment to adapt to ergonomic needs as well as lighting and workpiece holder. The torsion bars delivered in grid boxes are inserted into the receptacle, and their barcode is scanned with a WLAN-capable, intelligent torque wrench. The recording then locks.

The next step is to open a parts bin that contains the right side components. The physical barrier to the parts containers is realized by an intelligent flap door technology. At the same time, a illuminated pushbutton on the container calls for removal, which is acknowledged by pressing the button (pick-to-light). Then the removed part must be held in front of a camera to verify it again. In this way, labeling errors on the part of the supplier are excluded as well as assembly errors of the system. After approval by the camera, the component can be mounted.

This is followed by another test step by plugging into a sensor. Only with its OK, the screwing tool is released and allows the tightening of the connection to exactly 100 Nm. All individual steps must be completed and the torque must be properly tightened before the second container is released and the process for the left side can be repeated. After an error-free completion, the recording releases the finished workpiece so that it can be sequenced.

Integration of customer technology in the manual work stations 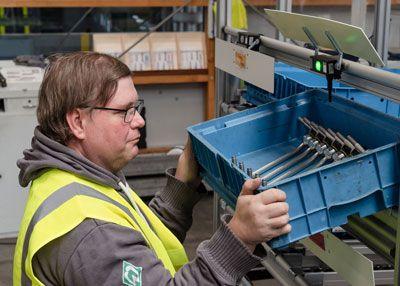 "The challenge of this project was to integrate the existing technology into the error-free process. But thanks to the interface configuration of our Poka-Yoke controller, this requirement was not a problem, "says Nils Knepper, Senior Product Manager for Modular PLC / Software at Mitsubishi Electric. The SPS built in a small control cabinet in place Series "Melsec iQ-F "is the intelligent, individually configurable and extensible center of the solution that organizes the removal and assembly sequences.

In addition to its own components, sensors and actuators from third-party suppliers can also be integrated. In the present case, in addition to the digital torque wrench, this is an industrial image processing system. The connection of a barcode printer is in progress; Thanks to existing common interfaces, this is easy to implement on the control side.

"When designing the user interface, you were very flexible and responded to our requests. Because many of our employees are not able to read well, we use smileys and other symbols, "says Miriam Berger. "In addition to process reliability, the Poka-Yoke workstations have the big advantage for us that, unlike in the past, we can use almost any employee for the job." In the background, the supporting visualization from the Poka-Yoke controller to the 10-inch Touch-screen terminal communicates.

The hardware and software from Handke and Mitsubishi Electric offer easy scalability, convenient configuration, programming and commissioning, as well as comprehensive connectivity options (including MES and ERP). After the freedom from defects and the technical potential has been achieved, Werkstatt Bremen is now examining whether the buffer store can be dispensed with in the future and pre-assembled directly in sequence for the automobile factory. 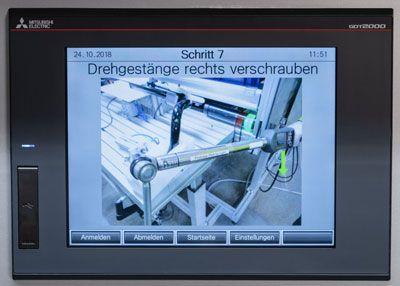 "The need for error prevention exists in assembly and production everywhere. Important is the fast and flexible adaptability to the needs of the person working there and the requirements of the process ", comments Andreas Kebbel, Managing Director of Handke Industrie-Technik.

For this reason, Mitsubishi Electric and Handke offer their solution in the form of a modular system with a large selection of components and interfaces for user guidance. These include, among other things, mechanisms for the correct removal of parts such as light barriers, pick-to-light pushbuttons (alternatively: pick-to-voice), barcode scanners and proprietary pick-to-door mechanisms with lift switches. In addition, there are control mechanisms such as electric screwdrivers with torque and angle detection and vision systems, as well as possibilities for robot collaboration.

The individual production steps are represented by HMI devices GOT2000 series available from Mitsubishi Electric. They provide seamless connectivity to the poka-yoke controller and meet every need for illustration from text to icons, animations and augmented reality. As controller of the guided manufacturing solutions, a PLC of the latest control generations iQ-R or iQ-F is used depending on the requirements. The Guided Operator Solutions can be integrated into production control systems so that workplaces can be networked and resources can be controlled and monitored in real time.

"Workshop Bremen is a fully-fledged supplier in the economy, guaranteeing freedom from mistakes and meeting deadlines. The new jobs help us a lot, "says Miriam Berger. The positive experiences in Bremen got around quickly. Nationwide inquiries of integrative workshops are already available according to Andreas Kebbel.

development scout TV - Statement Fair This e-mail address is being protected from spambots To display JavaScript must be turned on!