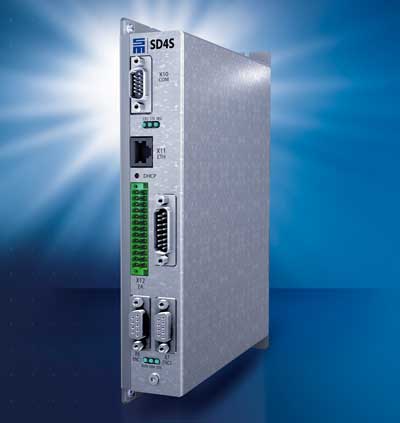 Based on the new Development platform SD4x developed Sieb & Meyer now a future-proof one inverter Family. The frequency converter support new ones interfaces as Profinet, Ethercat or bite and offer a number of additional functions. Higher speeds and significantly better performance await the user. The developers start with the SD4S converter. The frequency converter is designed for small High-speed spindles or High-speed motors in the power range of a few 100 W.

The converter family SD4x offers a significantly improved processor performance: The new 5-bit processor is up to 2 times faster than with the current SD32x product family. It allows a higher resolution and more accurate calculations. Sieb & Meyer has also switched from fixed-point to floating-point arithmetic. This allows the inverters to be designed more flexibly.

With the new processor, more complex tasks can be solved faster and control technology solutions with higher resolution and dynamics can be implemented. On the storage side, the 500-fold larger storage was also significantly increased. In summary, the optimized performance, higher speeds and low motor warming without sine filters are the main advantages of the SD4x converter family. The improvements allow completely new areas of application.

The SD4S converter was designed for small high-speed spindles and motors in the power range of a few hundred watts. It is used, for example, in dental milling machines or machines for fine machining as well as for the watch industry. Because the necessary insulation strength is often not provided in the motors for small spindles, the SD4S now enables electrical isolation of the thermal contact. The overall width is only 40 mm.

The parameters are set via a standard Ethernet interface, which replaces the fault-prone USB interface. The SD4S also has configurable digital interfaces for measuring systems such as Biss-C, Endat2.2 and TTL. A web server enables information to be called up without additional parameterization software. The integrated real-time clock allows interactions with external events or processes and an exact analysis of errors.

Sieb & Meyer will continuously expand the performance classes of the SD4S.