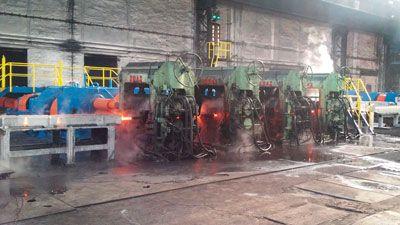 From iron ore mining to steel rolling mill offers Mayr Antriebstechnik für die Iron and steel forward-looking safety clutches with high power density as well as high torques and speeds. Because where stones break up and hot steel steams, only robust, robust and solidly dimensioned couplings can cope with extreme loads. And so, in the rolling mills of Arcelor Mittal, the couplings made of Mauerstetten ensure maximum operational reliability and maximum productivity.

Arcelor Mittal Ostrava (AMO) is the largest steel producer in the Czech Republic and part of the world's largest steel and mining company, Arcelor Mittal, with an annual production volume of around three million tonnes of steel and 7500 employees. Among the most important customers of steel, which is produced in addition to the plant in Ostrava at several other production sites in the Czech Republic, include the construction industry and mechanical engineering.

After the molten steel has been poured from the furnaces to slabs, slabs, blocks or billets and thus brought into shape, these primary blanks are processed in the rolling mills and formed into finished steel products. In order to permanently protect the engine, transmission and other drive components from expensive overload damage in the rolling stands, AMO relies on the reliable ones "EAS-HT" safety clutches of the drive specialist. The uncoupling clutches stand for a nondestructive limitation of dangerously high torques and can easily withstand the harsh environmental conditions in steel production. They help to save material, manpower and costs and increase productivity in the rolling mills. 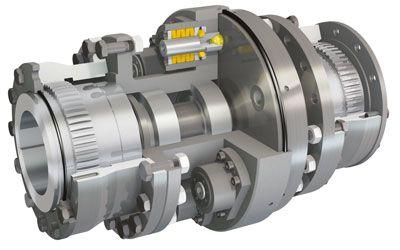 The growing demand and the constant demand for more productivity demand maximum performance from the rolling mills. In this case, even overload cases can never be completely avoided. Overload occurs in the rolling stands, for example due to a varying material consistency of the steel as a function of the temperature and associated problems in the rolling process: for example, if the material is not hot and thus not soft enough and abuts against the rolling rolls.

Often, even a single overload damage is much more expensive than a safety clutch. The investment for a clutch is thus out of all proportion to the costs that would result, for example, in transmission damage both in terms of material costs and production downtime. That is why the steel manufacturer uses the EAS-HT safety couplings in the rolling stands, which reliably protect the drive train against damage. The clutches are located between the engine and the gearbox and limit the torque exactly to the set value: the maximum torque is 170.000 Nm, the maximum speed is 400 min-1.

"The free-switching EAS-HT couplings are element couplings that are ideal for applications with very high torques and speeds or high mass moments of inertia," explains Thomas Gebler, area sales manager at Mayr Antriebstechnik. "These couplings are based on individual overload elements integrated in the flanges. The achievable torque results from the biasing force of the elements multiplied by the number of elements and the radius at which the individual elements are arranged. "Due to the modular concept not only tailored to the particular application couplings, but there are all also much higher torques than with a central Ausrastmechanismus controllable. So far, the company has supplied safety clutches with torque of 540.000 Nm. However, the limit is still far from being reached: Thanks to its modular design, safety clutches with torques of several million Nm are possible.

Function in case of overload 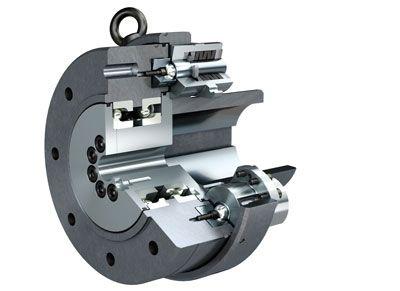 In the case of the EAS-HT element couplings, the individual overload elements transmit the torque positively in trouble-free operation. In case of overload, they separate input and output in fractions of a second, almost free of residual torque, with high switch-off and repeat accuracy. It only affects the friction of the high-quality pressure flange bearing. The kinetic energy of the rotating masses stored in the system can run out freely. The element couplings remain disconnected until they are easily and quickly re-engaged by hand or by pneumatic, hydraulic, mechanical or electromechanical devices.

Unlocking clutches can cope with long run-out times of the drive after the response. When defining the permissible flow time, only consider the robust clutch bearing. Nevertheless, it makes sense to switch off the drive promptly after disengaging the clutch and shut down. The overload signal can provide a speed monitoring or a non-contact limit switch, which permanently monitors the operating state of the clutch. Due to the complete separation of drive and output no detent impacts occur during the follow-up time, which could have a negative effect on the drive train.

On the other hand, shear bolt couplings have defined breaking points (breaking pins) which break when overloaded, thus preventing damage to other components. After an overload, however, the destroyed components must be replaced. This causes costs and plant downtime. In addition, the release torque is associated with relatively large tolerances: The break bolt couplings lose over time to transferable torque, as the break bolts wear out and thus often separate too early, which in turn leads to unnecessary downtime. "The EAS-HT element couplings have been proving themselves in our systems for over a year now," adds Karel Satke. "Since then, there was no premature rest. The clutches will snap exactly when we need it. This enabled us to reduce downtime by more than 80%. The re-engagement is now easy and fast. "

Before a clutch leaves the factory in Mauerstetten, it is thoroughly tested and set exactly to the required value. For this purpose, Mayr has a variety of modern testing options and can draw on decades of experience in development and design. An electronic database, in which the measured values ​​are archived together with the associated serial numbers of a product, guarantees an 100-percent traceability.

Picture above: An investment that pays off: EAS-HT safety couplings are an indispensable component in rolling mills in order to achieve high productivity and avoid downtimes caused by overload damage.

developmentsocut TV - Fair Statement Another contribution of the manufacturer Download product brochure This e-mail address is being protected from spambots To display JavaScript must be turned on!
Tweet
© 2010 - 2020 Designed and Powered by German Online Publisher