Pneumatic safety brakes with the power of hydraulics 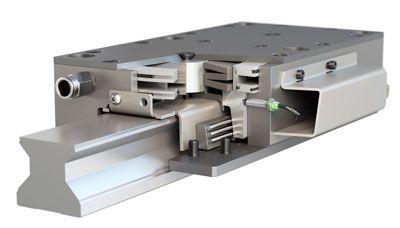 With a braking concept that meets both the constantly growing safety requirements and achieves a high power density without the use of hydraulics Mayr Antriebstechnik new standards. The specialist for clutches and brakes extends the proven "Roba guide stop"Series by one pneumatically ventilated version, which offers users new possibilities with its high holding power.

The compact safety brake in a small space with high forces without hydraulics is a new, powerful, pneumatically ventilated version of the Roba-guidestop profile rail brake. Thus, the brake specialist from the Allgäu region offers users a broad product portfolio.

"For machines and systems in which a hydraulic system is already available, users can continue to rely on the proven, hydraulically released Roba-guidestop safety brakes," explains Alexander Müller, developer at Mayr. "However, in applications where a hydraulic system would first have to be installed in order to operate a brake with high holding forces or if several brakes were required to achieve the corresponding forces, the pneumatically released safety brake is now used. It achieves the same high holding forces as the hydraulic version of the brake and clamps profile rails just as accurately and without play, "explains the development engineer.

Selective pressure increase directly in front of the brake 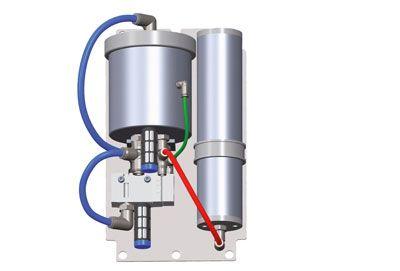 The pneumatic brake is opened with compressed air from 20 to 30 bar. Normal pneumatic networks do not provide these pressures. Costly investment for high pressure compressors and associated piping would be needed to install such a high pressure network. "We are therefore taking a different approach," says Alexander Müller, describing the new brake concept. "In order to achieve the necessary high operating pressure, a compact pressure intensifier is used together with the brake, which increases the system pressure common in pneumatic nets from 4 to 6 bar purely mechanically, without external energy."

This concept allows selective pressure increase directly in front of the individual brake, ie directly in the system where the higher pressure is needed - thus short high-pressure lines are sufficient. "The concept needs little space, is simple, safe and economical. Once the outlet pressure has been reached, no further energy is consumed, "summarizes Alexander Müller. The pneumatic Roba-guidestop is available in five sizes - in standard design and in a compact short version. It thus covers holding forces from 1 to 34 kN and is designed for various rail sizes of current linear motion manufacturers.

Like the hydraulic version of the brake, the pneumatic safety brake with very high rigidity acts directly on the linear guide. This means that it is directly attached to the masses that are to be held. This brings a decisive advantage, especially with gravity-loaded axles, when the risk of danger to persons is to be minimized: Drive elements between the motor and the moving mass such as spindle, spindle nut, shaft coupling or gearbox have no influence on the safety - unlike concepts with engine brake where all drive elements transmit the braking torque to the slide. In addition, every element between the brake and the slide has a negative effect on the stiffness. Systems with Roba-guidestop enable a much higher rigidity than solutions with rotary brakes integrated in servomotors.

Reliable and accurate by fail-safe principle 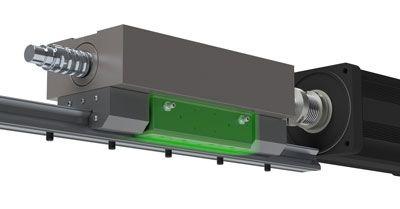 Like all the safety brakes of the drive specialist, the brakes of the Roba-guidestop series also work according to the fail-safe principle. That means: They are closed in a de-energized state. When the safety brakes press biased disc springs, the brake shoes on the 'waist' of the rail, the rail is thus clamped. The brake mechanism is designed for relatively large stroke paths. This allows the brake compensate for manufacturing tolerances in rails without losing braking power.

The backlash-free clamping of the Roba-guidestop directly on the profile rail offers even more advantages: the additional stiffening of the NC axis increases process accuracy, increases machining performance and, for example, can bring further technological advantages in heavy-duty machining. The machining is less vibration and thus the surface quality of the workpiece is positively influenced. When the axis is stationary, for example during machining, the brake can take over the load. This makes it possible in this phase to shut off the drive motor and to take out of the scheme. This eliminates the control movements and thus protects the ball screw. The closed brake absorbs axial forces. Service life and maintenance intervals of the drive components are extended.

With the Roba-linearstop Mayr offers another safety brake for braking and holding linearly moving masses. It acts independently of the drive on a piston rod. It also works on the fail-safe principle and generates the braking force by means of compression springs. Depending on the model, it is hydraulically, pneumatically or electromagnetically released and is available as a full brake for dynamic braking or as a clamping unit.

The pneumatic version of the Roba-linearstop safety brake has been tested and confirmed by TÜV SÜD Industrie Service GmbH as a fully-fledged dynamic braking device. It easily complies with the test principle for emergency braking with holding function for linear movements (GS-MF-28) of the BG Institute for Occupational Safety and Health (BIA). This test standard defines 1 million circuits with and without load transfer as well as 1000 dynamic braking.

The pneumatic clamping unit is also certified by TÜV SÜD Industrie Service GmbH: In addition to the required test criteria for holding brakes, the 100 test carried out dynamic braking - the brake also satisfies these requirements without any problem. 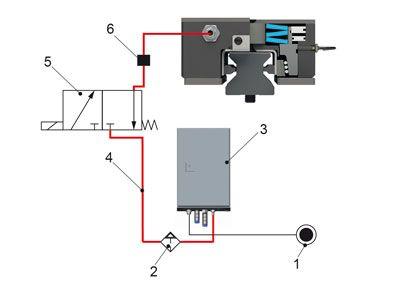 The linear brakes available on the market today usually function as static clamping units and are designed to hold the axles at standstill. However, persons can also remain under suspended loads during commissioning, maintenance or even during the production process, without first transferring the load to the mechanical linear brake. If the drive fails completely in these operating states, the linear brake alone is responsible for safely decelerating the load. Within a very short time, it must bring the axle to a standstill in order to reliably protect the persons from damage.

In safety-critical applications it is therefore important that the brakes are also designed for dynamic emergency braking. Mayr has the pneumatic Roba-Guidestop with pressure booster therefore carefully tested for its safety function. The brake achieves extremely short incidence times. This makes the braking distance during dynamic braking very short. Overall, the braking system is extremely robust: the test still achieved a very high level of force even after 2 millions of switching cycles.Another contribution of the manufacturer Documentation Roba-guidestop Documentation Roba Linearstop This e-mail address is being protected from spambots To display JavaScript must be turned on!
Tweet
© 2010 - 2020 Designed and Powered by German Online Publisher